This is my September entry for the Australian Writers’ Centre's Furious Fiction contest. Posting on my blog again so it can live forever. I've always found it hard to get my head around the idea of contests and awards for creative pursuits. So although it would be a lie to say I don't want to win (because who doesn't like to win things?), the honest goal is only ever to write something that I like. And I like this.

For the contest there is a three day window in which to write a 500 word story, in addition to which the following rules must be observed: 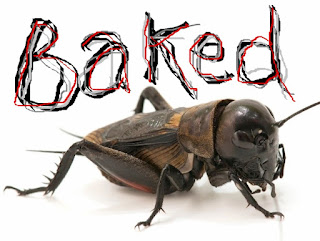 This used to be a nice street, you know? Mowed lawns, picket fences, the whole nine yards.  We used to joke it was like that neighbourhood in Edward Scissorhands - so close to perfect it was almost a parody.

But then Jesse moved in. He devastated that street like a gale force wind. Where once there was tranquillity, there was now chaos. In one afternoon my quiet existence was shattered, like the garden gnome his moving truck broke. He was the Godzilla to my peaceful Tokyo.

Over the next six months his terrible music at 3am, daily drum practice and the conversion of his front lawn into what I can only assume is a Thunderdome, shredded my every last nerve. I tried talking to him, hell, the whole neighbourhood did. He just smirked and claimed he had the right to do what he liked. But I’ve always prided myself on doing the right thing, leading by example. So in the spirit of rising above it, of being neighbourly, I decided to bake Jesse a cake.

I closed the door behind me and descended the creaking, wooden staircase to the lower reaches of my house. The bakery itself was pretty nondescript. What do you want me to say? It’s got four walls and a concrete floor.  I installed the benches myself though, and the wall mounted terrariums. The hive’s myriad tunnels scratched through the earth like a central nervous system. As beautiful as a painting. The climate control system kept everything watered and the temperature regulated. See, when you’re baking a cake it’s important to use premium ingredients. And I wanted my ingredients to be large and agitated and swarming when I released them into Jesse’s house.

The roaches were first. They bred quickly and in stunning numbers. I am a good baker. I rigged a delivery pipe to connect my basement to his. It was actually quite simple.  For one blissful week, the music stopped, the noise abated and my street returned to solitude while the house was fumigated. But as soon as Jesse returned, so too did the clamour of his existence. So the Fire Ants were next, and then the wasps.

But Jesse kept returning. He has so far, I suppose, been the most unkillable pest of all.

Posted by brucechimp at 05:44 No comments:

Markus (Mads Mikkelsen) is a soldier, deployed to Afghanistan, when he receives the news that his wife and daughter were in a train accident. His wife did not survive. Returning home to Denmark, Markus struggles with his grief. He refuses advice, counselling and anything resembling any form of help. Markus struggles to relate to his daughter, Mathilde (Andrea Heick Gadeberg), and is not a comforting presence. Their relationship was already distant and his grief-driven bouts of violence and unsympathetic advice drive a further wedge between them.

A few days after the crash, they are visited by Otto (Nikolaj Lie Kaas) and his two friends, Lennart (Lars Brygmann) and Emmenthaler (Nicolas Bro). Otto was on board the train with Mathilde and her mother, Emma (Anne Birgitte Lind). As a mathematician by trade, Otto is convinced that, statistically, the chances of the crash being an accident are almost impossible. He presents Markus with compelling evidence that the three friends have uncovered: The crash was intentional, and responsibility lies with a criminal biker gang called the Riders of Justice. The four new friends set out to make them pay.

IMDB: Riders Of Justice
Posted by brucechimp at 23:48 No comments:

On 26 April 2000, the actor David Arquette won the WCW World Heavyweight Championship. Despite reservations from Arquette himself, the victory was devised as a publicity stunt to promote the wrestling movie Ready To Rumble in which he was starring.

Somewhat predictably, the fans did not like the idea of an untrained Hollywood actor winning one of the most prestigious titles in wrestling, feeling that it cheapened the sport. As a result, Arquette has spent the best part of two decades being despised by fans of the sport he grew up loving.

A pariah in wrestling circles, Arquette also attributes his stint in the WCW as the reason his acting career stalled. Although in fairness, his filmography would suggest he has, in fact, worked quite regularly over the last twenty years. Highlights including the very underrated Eight Legged Freaks and a supporting role in the excellent horror western Bone Tomahawk. Nevertheless, between the WCW and his most famous role, as the lovably inept Deputy Dewey in the Scream franchise, Arquette has found it hard to be taken seriously in the intervening years.

So David Arquette sets out to put things right... 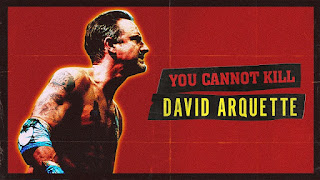 Posted by brucechimp at 00:33 No comments:

HALT AND CATCH FIRE (full article at The Guardian Australia)

Halt and Catch Fire was a series that went majorly unnoticed. It flew well under the radar and this is a pity, because its decades-spanning story about technological innovators, their successes, failures, and the friendships that pin it all together, is as compelling and addictive as any of the better known ‘prestige’ shows that captured awards and imaginations at the time.

Read the full review at The Guardian Australia: 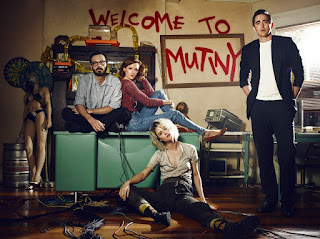 Posted by brucechimp at 05:49 No comments:

This is the short story I wrote for the Australian Writers’ Centre’s Furious Fiction contest in August. As always, I like to post these up here to give them some form of existence.

I hadn’t written fiction in a little while, due a combination of focussing on other writing projects and Melbourne lockdown malaise. The last couple of stories I wrote ended up being a bit of a chore, and inevitably, I wasn’t happy with them. But I’m very happy with this one. It was fun to write and it fell into place easily. And that’s the feeling I’m chasing when I write anything. 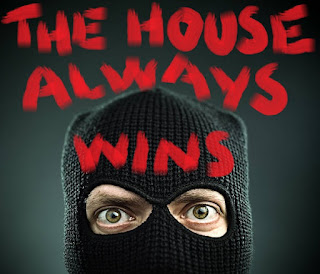 You pull up outside. The car is a real rust bucket. Dented rear end, flaking paint, broken CD player.  But it’s nondescript, has four wheels and a full petrol tank. It will do a job. It’s 8pm. The last shift ended two hours ago and the place will be empty.

Three people exit the backseat and approach the building. They wear boiler suits and woollen balaclavas. It’s thirty degrees and ninety percent humidity. The car smells like a locker room. The two in front crowd around the third as he futzes with the lock. If the alarm gets tripped you have ten minutes, easy, until the cops arrive. Private security is another matter. They’ll be here in three, but rent-a-cops don’t have the resources. Any half competent driver can evade them. The head figure nods at you before they move inside. You wave back in acknowledgement. You’re all on the clock now.

Getaway driving isn’t easy. The movies glamourise the profession. Every hot shot with a fast car and a faster attitude thinks he can do it. Walking around with a hammer in his back pocket and toothpick poking out the corner of his mouth, like a right dickhead. Or blasting a mix tape so loud he doesn’t even hear the cops until he’s got a boot on the back of his neck and a face full of asphalt.

There’s a skill set - inherent to doing it well - that involves much more than driving. You need patience, observational skill and good planning. There’s a lot of spontaneous decision making, but also a lot of sitting around. A lot of musty, hot, stinky cars. A lot of close environments, shared with the sort of terminal loser who thinks the world owes him.  Every one of ‘em a degenerate gambler, betting everything on their own deluded ego.  No sense to get out while they’re ahead, so the longer they keep coming back for more, the smaller their options get. Every one of ‘em headed for a box in the ground or a prison cell.

The other thing the movies always get wrong is the dramatic escape. People getting shot on their way out, cops lying in wait, and so forth. But if events go off book, the drama happens inside. Always. You hear a dull thud. Might be a gunshot. Might be a cabinet tipping over. All you know is, they’ve been inside nine minutes and thirty seconds, which means they’re toast.

So you drive to a deserted car park underneath the river bridge and set fire to the rust bucket. You walk half an hour to a train station on a different line and go home. You broke your only rule. You agreed to a share this time. Always get paid up front because, as the 11 o’clock news informs you, your share is sitting in that building in a pool of blood, among the bullet ridden remains of three gamblers who forgot to check for a security guard.

Posted by brucechimp at 03:37 No comments: